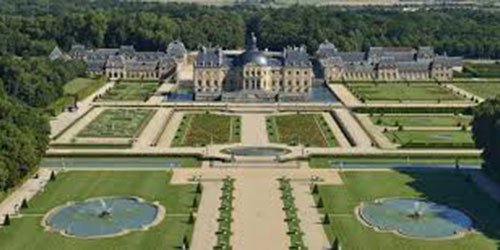 Last Saturday I went to the fabulous Vaux le Vicomte Chateau. Outside of France little is known about this beautiful chateau which was the inspiration and model for the Chateau de Versailles.

In the warmer months every Saturday, between May and October, as evening falls, over 2,000 candles are lit throughout the château and gardens, the chateau is closed between 5.30 – 8.00 pm in preparation. And what a site it is! Just beautiful. With the sparkling lights of the candles, complemented by classical music in the background, looking out onto a section of the garden, stretched out in a chair, sipping champagne (of course), the rest of the world seemed so very far away. You felt almost like being trapped in time.

Arriving before 5.30 pm while it’s still light is a must as from the top of the castle from the roof top dome you have a panoramic view over the castle grounds. Quite spectacular!

It’s worth mentioning a brief history of this extraordinary castle. Vaux was the tragic setting for the downfall of Nicolas Fouquet, who was a faithful minister in the court of Louis XIVth who paid the price of life imprisonment, because of an embezzlement he did not commit, the jealousy of others and also because he went a little too far in his lavish hospitality, making the King quite overawed and envious. Vaux was also a haven for leading French artists, writers, poets, painters and sculptors who gave the best of their talents to the glory of Vaux.

In the early seventeenth century, between the royal residences of Vincennes and Fontainebleau, a small castle stood at the confluence of two small rivers. The domain was called Vaux-le-Vicomte. In 1641 a 26 year-old parliamentarian, Nicolas Fouquet, purchased the estate. Fifteen years later the first stone of a unique masterpiece was laid; it was to be the finest château and garden in France. This achievement was brought about through the collaboration of three men of genius whom Fouquet had chosen for the task: the architect Le Vau, the painter-decorator Le Brun and the landscape gardener Le Nôtre. They were not alone; the poet La Fontaine, and the playwright and actor, Molière, were amongst the celebrities who were part of the social circuit at the Chateau.

Today the visitor sees a castle completely furnished and open entirely to the public. Unlike other castles, where many of the rooms are out of bounds, you can see just about every room at Vaux le Vicomte. You will see the state apartments, private cabinets, the dining room, the kitchens and cellars in the basement.

But the most jaw dropping were the rooms: the furniture from the 17th century, the ceilings, the walls, the colour, the magnitude of the expense and the detailing was really amazing! Each room, one more beautiful than the next. No expense has been spared. AND taking of photographs with a flash was allowed!

The most fascinating room of all was certainly the ballroom. It had the WOW factor. In front of our eyes we were watching the setting of a seventeenth century court dance. I won’t give too much away, but the room seemed to have been extended and that people from another century were dancing in the room. It worked very well and captured everyone’s attention, we were all transfixed.

There are plenty of other things worth seeing like the Horse Carriage Museum, a unique and private collection of 18th and 19th century carriages; the Fountain Show where the fountains are still gravity fed, the same way as they were in the seventeenth century and even a Moliere play performed under the stars.

And lastly, it’s a great place for kids and grown ups wanting to dress up. Children’s activities are organised like Easter egg hunts, riddles, treasure hunts, costume tours, and children’s theatre. Everything is designed to enable them to discover this page of French history. It was a terrific afternoon and evening spent at Vaux le Vicomte. Highly recommended!