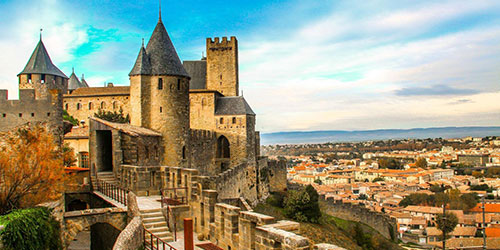 Montpellier has a lot to offer, it is a medieval city where in the town centre you will find Place de la Comédie, Faculté de Médecine, Place Royale du Peyrou and the Fabre Museum. The Museum des Beaux Arts in particular is exceptional and the ancient medical school (an important part of the city’s history) is very interesting. Up 90 stairs to the top of the Arc de Triomphe and you have lovely views over the city.

Next stop Perpignan, a city situated almost on the Spanish border has certainly a Catalan flavour. Plane trees and Palm trees coexist along the wide sun-drenched avenues. There is a lovely Museum here that has sculptures by Maillol who came from Perpignol.

Dinner was at the Restaurant St. Jean in the heart of the old city.

The following day we stopped in the seaside town of Collioure, considered the jewel of the rocky coast. The small Catalan port nestles in a sheltered bay in the Mediterranean Sea while directly behind are the Pyrenees mountains.

For lunch we visited a vineyard and restaurant called Domaine de Rombeau which I highly recommend. The food was very good and the staff were very nice considering during peak season the restaurant can cater for hundreds of people.

We then continued to the Memorial Rivesalte, a moving museum and memorial to the different groups of refugees who were detained on this site, first housing the Spanish refugees from the civil war, then undesirables from WWII (Roma, Jews, Communists) and eventually Algerians. It was very moving and the architecture of the museum was extraordinary. You would never know there was a museum.

We then continued to the Abbey of Fontfroide, a remarkable Medieval Abbey with an exquisite cloister and church, the Abbey was founded in 1093.

Our next destination was Narbonne, a charming town with an ancient Roman history. Founded in 118 BC, this town is none other than the very first Roman colony to be established outside of Italy. There are splendid vestiges of the Roman city, with part of a Roman road that was recently uncovered that passes through the town square.

We did visit the 13th century cathedral that was never finished, very impressive nonetheless. Just 30% of it had been completed, this cathedral has one of the tallest cathedral ceilings in France. Just extraordinary.

From Narbonne we continued to Carcassonne, known as a fortified medieval town, is the largest intact Medieveal city in Europe.

We checked into our hotel, the Mercure just a 5 minute walk from the entrance to the ancient city. I literally was given the best room of the hotel, room #43, their junior suite, with views looking directly to the fortress. The evening lights so nicely positioned to light up the fortress and in the morning it was bathed in yellow morning light.

We then went to the fortress for a tour. The town is splendid, but of course pretty touristy. We met with a guide who was dressed as a knight. If you can’t dress up as a knight in Carcassone, where can you?

A couple of hotel recommendations, the Hotel du Donjon, 4* a boutique hotel with only 38rooms situated within the fortress walls and the nearby Hotel de la Cité, 5* the jewel of the crown. The hotel began at the beginning of the 20th century and the decor is an interesting and successful mix of Art Nouveau and Neo-Gothic. Celebrities, presidents and aristocrats would stop here between Biarritz and Nice or Biarritz and Paris (including Winston Churchill and Walt Disney, to name just two) and you can look at the old register to see their signatures and comments. It is so elegant, understated and perfect.

Dinner was at the 1* Michelin hotel restaurant the Barbacane. Simply wonderful and delicious.