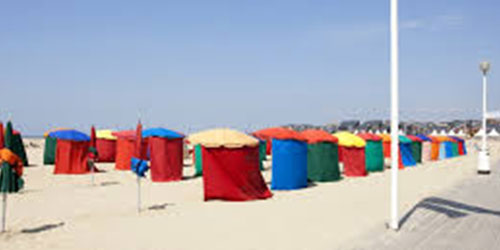 The great thing about Paris is that it really is conveniently and centrally located, almost in the middle of France. Many of the outlying cities and towns are just 2 – 3 hours away by train. So next on my list of discovery was the Cote de Fleurie, namely Deauville/Trouville and the beautiful Honfleur.

The train station in Deauville is in the middle of the town, so all major hotels are a short walk away. As I passed last weekend in Deauville, (being the height of summer) its easy to make comparisons with the Riviera. Beaches are really all that the 2 areas have in common. With its tudor style grand houses lining the streets that lead up to the beach, the town has more of a Brita

nic feel than anything.

As I walked along the boardwalk, or ‘Les Planches’ in French, I could picture the grande dames from the Belle Epoque (late 19th & early 20th century) slowly walking along the same boardwalk with their frilly umbrellas and dresses, arm in arm. This famous promenade along the beach, is made from a type of hardwood from Madagascar that is reputed to be totally resistant to decay and rot, and is 643 metres long.

It is lined on one side by small change cabins sporting the names of the American stars who have come to Deauville during the American Film Festival over its 35 year history, and on the other by the celebrated parasols, whose dominant blue and red are the colours of Deauville. I couldn’t stop taking photos of them, they were just so vibrant, dotted along the sand. But one thing I found quite extraordinary was the distance from the boardwalk to the water. It would have to be the widest expanse of sand that I have ever seen at any beach in the world!

Deauville today is a town in the ‘Calavados’ department of Basse-Normandy, besides its long history of being a prestigious beach resort, it has turned itself into much more than that. Its features a racecourse with yearly horse races through the summer months, a harbour, an international American yearly film festival, a grand casino and two beautiful and glamourous hotels being the Normandy & Royale Barrière Hôtels.

Sister-city Trouville lies across the Touques River. Trouville is older than Deauville. It was a popular beach resort for French nobility back when Deauville was still mostly swamp land. While tourism is still very important to Trouville, it also derives its revenue from fishing and thus has a fine reputation as the place for seafood. For the most part though, Trouville Beach is just as upscale as Deauville. There is also a lovely boardwalk with colourful parasols here too…

Next, I went to Honfleur and just fell in love with this beautiful medieval village – one of the prettiest ports in France. One of the main places of interest is Saint Catherine’s Church built by local shipbuilders as a temporary structure in the fifteenth century; the ceiling of the church resembles the hulls of upside down ships. What is so different about this church, built by the local people, is that it is made entirely of wood and has a separate bell tower from the principal building.