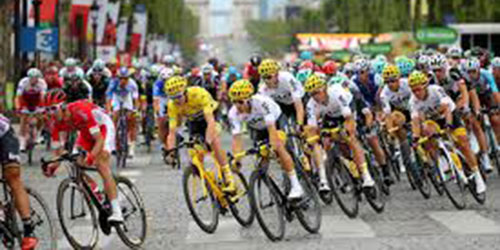 As I stepped out of the Metro station, I had no idea of the crowds and the buzz I would encontre along the Champs Elysées. I was lucky enough to have one of the best spots to watch the final, not from below amongst the 300,000 people lining the Champs Elysées, but from a balcony on the 5th floor of the Claridge Fraser Suites.

With 110 apartments, including studios, one, two and three bedroom flats, it’s a great alternative to long hotel stays, especially for families needing kitchen facilities. The best thing about the Claridge is its position. How can you go wrong when you are located on the best boulevard in Paris?

With a glass of champagne in hand we waited impatiently for the cyclists to make their approach. Around 4.30pm-ish, sirens and horns started to blast and within a few minutes the first group of cyclists cycled past our window. There were 7 in the lead, then a minute or two later, the rest of the pack arrived, it seemed liked hundreds of them making up this second group. Looking down onto the group, they were so colourful in their respective country’s

jerseys. If you missed them cycle past, you needn’t have worried as they did the circuit of the Champs Elysées 8 times! I’m not certain when the actual finishing line was whether it was after the 8th lap or after the first, but it was great seeing them cycle past on both sides of the boulevard 8 times. It really was a magical afternoon. Of the 7 elite cyclists who were in the first group, this didn’t change, they all stayed together, each one vying to cross the line first. It was also interesting to see the second group, at one stage they cycled past single file, at another time, they cycled past in a group. The dynamics of such a race I found quite interesting.

The ultimate winner this year was Alberto Contador from Spain, with Lance Armstrong coming third. I wonder if he was disappointed? The other outstanding cyclist this year was Mark Cavendish from Britain, who came first in this last leg on the Champs Elysées. As I stood on the balcony looking down onto the second group cycling past, I wondered to myself, why put yourself through a 3 week grueling event, only to come 54th?

It was a fun afternoon, and to be there to witness the final stage of the Tour de France 2009 with such a view as I had, was indeed a special souvenir for me.