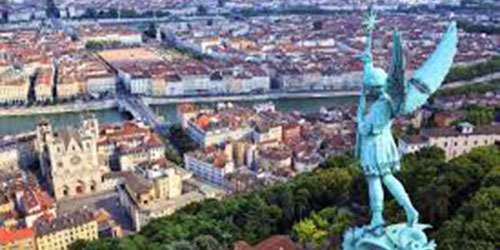 A quick 2-hour TGV journey from Paris takes you to the heart of French food country, the gastronomic capital of France – Lyon. Every year, food lovers from around the world flock to the city’s Michelin-starred restaurants, however I chose to try its more humble LBL’s – Le Bistro Lyonnais – otherwise known as bouchons.

Historically in the 19th century, when the city was the center of the booming silk industry, the workers – on 18 hour shifts, had lunch in tiny inns which they called “bouchons” – named after the dried branch bouquets which owners would hang up outside the establishments. These were (and remain) typically family-run establishments, have the ubiquitous red and white checked tablecloths and offer a welcoming, home-style atmosphere to them. They were often started by entrepreneurial mothers, who’d given up working in the home of nobles and la bourgeoisieand have been handed down generation after generation.

The meals were hearty to help the working class get through their long workdays – close to we’d call “comfort” food today. And the wine – Côte du Rhône, with its hints of grapefruit and pepper.

A traditional Lyonnais menu centers around meat and fat, particularly pork and the insides–or offal. Far from awful, the typical fare includes andouille(made from the stomach of a pig), tripe(again made form pig or cow’s stomach), or boudin noir(blood sausage, made with pork, fried onions, fat, and blood).

I have in the past tasted andouille and boudin noir, so this time I opted for something quite different: Quenelle de Brochet sauce Nantua. Good choice! This meal was so delicious I found myself soaking up the sauce with my bread at the end – something I very rarely do.

The quenelle is a dumpling made from eggs, butter and flour, has a mousse-like consistency and is traditionally made with pike fish and a crayfish sauce. I highly recommend it, it is one of the gems of traditional Lyonnais cooking.

For my second meal I chose Gateau de Foie Blond de Volaille. This translated is cake of chicken white liver. It was a tiny round cake that came with a tomato sauce with green olives, button mushrooms and bite sized polenta cakes. Unfortunately, there was lots of parsley in the recipe, which I don’t like. I It was not to my taste – but it is popular.

Now that I am back home, I’m going to search for the nearest Lyonnais-style bistro and order some quenelle and cochonnailles (pig-things). My mouth is watering at the very thought!