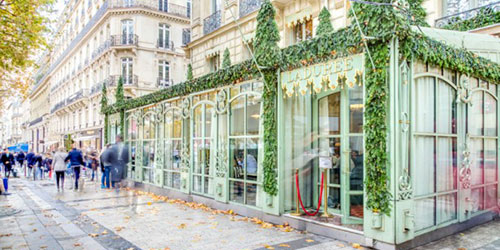 After watching the final stage of the Tour de France 2009, I decided to go and have afternoon tea at Ladurée on the Champs Elysées. Ladurée is a French institution and was established in 1862. They are known for their macarons, they employ 45 pastry cooks and 40 cooks. It was my fist visit and their macarons were superb, melt in the mouth sensation!

When you order a plate of macarons you get to choose, so we ordered Caramel, Rose Water, Chocolate and Chestnuts – all absolutely delicious. I don’t know whether it was the macarons themselves or the maison or the atmosphere, but everything was perfect. Even the service was exceptional!

It seems the origin of the Macaron is a bit murky, some culinary historians claim that macaroons can be traced to an Italian monastery. The monks came to France in 1533, joined by the pastry chefs of Catherine de Medecis wife of King Henri II. Later, two Benedictine nuns, Sister Marguerite and Sister Marie-Elisabeth, who came to Nancy seeking asylum during the French Revolution introduced the macarons. The two women paid for their housing by baking and selling macaroon cookies, and thus became known as the “Macaroon Sisters. Recipes for macaroons, also spelled “mackaroon,” “maccaroon” and “mackaroom” appear in recipe books at least as early as 1725, ie Robert Smith’s Court Cookery, or the Complete English Cook. Italian Jews later adopted the cookie because it has no flour or leavening (macaroons are leavened by egg whites) and can be enjoyed during the eight-day Passover. It was introduced to other European Jews and became popular as a year-round sweet. Over time, coconut was added to the ground almonds and, in certain recipes, replaced them. Potato starch is also sometimes included in the recipe, to give the macaroons more body. Today they are not only a tradition of Ladurée, but also a symbol of France.

If you are planning on a trip to Paris, an afternoon tea at Ladurée is a must, you don’t have to book, just wait in line for a table if you are coming for morning or afternoon tea. When we turned up, we got a table immediately. There are many rooms in the restaurant, so it doesn’t take long to get a table.

The restaurant itself is worth seeing, each room has been painstakingly furnished with classic French pieces, it’s absolutely exquisite.